Red Wings in search of momentum at Montreal 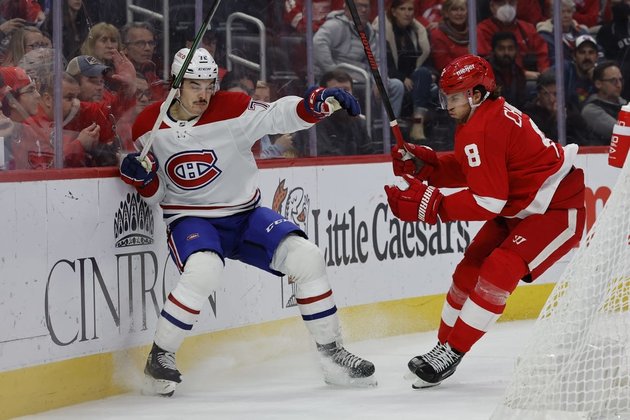 Overtimes and shootouts haven't been kind to the Detroit Red Wings this season. That's what made their overtime victory over San Jose even more satisfying on Tuesday.

They'll look to carry that momentum into a road back-to-back, beginning at Montreal on Thursday.

Andrew Copp scored 25 secondsinto overtime to beat the Sharks 3-2. The goal was set up by Michael Rasmussen, who pounced on the puck after Copp lost a faceoff in the San Jose zone. Rasmussen peppered the net until Copp scored on a rebound.

"It wasn't too tough. He did all the work," Copp said. "Won the battle off the faceoff after I kind of lost it and took it right to the cage and both guys (defenders) kind of went to him."

Detroit was 3-8 in extra sessions prior to the victory. While the Red Wings picked up a point in those losses, a few more victories after regulation would have put them in a much better position in the wild-card chase.

"Any win is good for us," coach Derek Lalonde said. "It feels like every time we get a win it's difficult, which is fine."

Rasmussen, who scored one of the regulation goals Tuesday, has made fine progress in his fourth NHL season. Still only 23, Rasmussen has 22 points in 44 games after contributing 27 points in 80 games last season.

He's played as a wing most of the season after playing center during his first three NHL seasons.

"You know a winger is good when every center starts to come hinting that they would like to play with him," Lalonde said.

Thursday's contest will be the third of the four-game season series between the Red Wings and Canadiens. Rasmussen had a goal and two assists as Detroit blanked Montreal 3-0 in its season opener. The Canadiens recorded a 3-2 shootout victory in Detroit on Nov. 8.

Following a seven-game skid spanning December and January, the Canadiens have been much more competitive the past two weeks. They've recorded victories over three top playoff contenders -- the New York Rangers, Winnipeg and Toronto.

In their last outing, they faced the NHL-leading Boston Bruins. The game was tied before the Bruins scored two goals in the final three minutes to claim a 4-2 win on Tuesday.

"We worked hard all night long," goaltender Sam Montembeault said. "We were right there with them until the end of the game, so it's a little disappointing. I think the way we worked (Tuesday) we would have at least deserved a point, but we'll get back to work and go back at it Thursday."

Kirby Dach scored both of Montreal's goals, giving him a career-best 10 this season.

"I'm just kind of going out there and playing and just trying to improve each and every day," Dach said. "I'm not really worrying about results, just focus on feeling good and playing a strong 200-foot game."

The Canadiens are wrapping up a five-game homestand on Thursday. They'll play a home-and-home set against Ottawa prior to the All-Star break.

The Red Wings visit the New York Islanders on Friday to complete their road back-to-back.