Illinois gets back on track, downs Ohio State 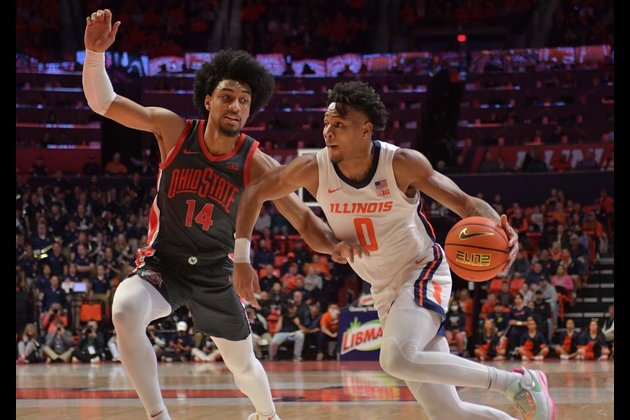 The Illini (14-6, 5-4 Big Ten), behind Shannon's 17 points and 14 from Epps, resumed their winning ways after a four-game winning streak was halted by Indiana on Thursday.

Brice Sensabaugh topped Ohio State (11-9, 3-6) with 14 points, and Justice Sueing added 13. Sensabaugh, who had nine points at the half, entered second nationally in freshmen scoring at 17.5 points per game.

The Buckeyes have lost six of seven.

Illinois blitzed the Buckeyes to start the second half, using a 10-0 run to take a 48-31 lead with 15:18 to play. The 17-point deficit was the largest of the season for Ohio State.

Dain Dainja sparked the surge with a short jumper, a dunk and then a steal that led to an Epps 3-pointer that forced an Ohio State timeout.

Ohio State slowly reeled in the Illini, and when Zed Key converted an and-one, the Buckeyes had closed to within 52-44.

But the Illini did not panic and recovered to make it 67-50 with five minutes left and were never threatened.

Key was cleared to play after injuring his left knee with 21 seconds left against Iowa on Saturday when he landed awkwardly after a dunk.

He did not score in the first half and fouled out with 5:05 to play, scoring eight points and grabbing three rebounds in 23 minutes. Key was third on the team in scoring (12.1 points per game) and first in rebounding (8.1 rebounds per game) entering Tuesday.

The Buckeyes play at Indiana on Saturday, the fourth game in a stretch of five of seven on the road. Also Saturday, the Illini are at Wisconsin.