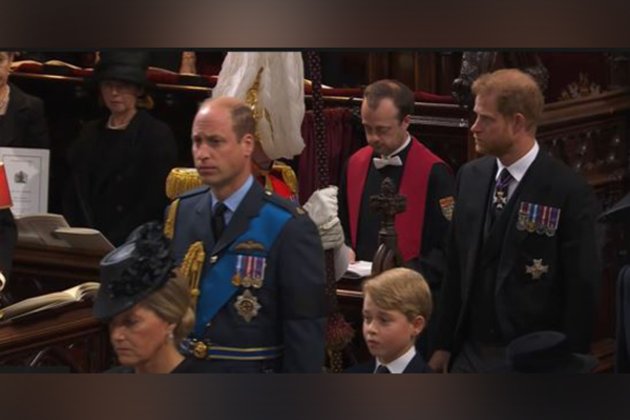 London [UK], September 19 (ANI): At Queen Elizabeth's funeral ceremony on Monday, while several members of the royal family were seen sporting military uniforms, there were some who wore suits.

According to People magazine, the late monarch's state funeral started with a procession from Westminster Hall to Westminster Abbey. Though King Charles III, Princess Anne, Prince Edward and Prince William sported military regalia, Prince Andrew and Prince Harry did not.

It had been previously confirmed by Buckingham Palace that only working members of the royal family who hold military rank will wear military uniforms during the events leading up to and including the Queen's funeral, reported People magazine.

As both Andrew and Harry are no longer senior working royals, they wore dark suits in the procession. Peter Phillips, who walked beside his cousin Prince Harry, also wore a suit as he does not hold any military ranks.

Netizens have been expressing their opinions on Prince Harry not being allowed to wear his military uniform.

One user wrote on Twitter, "One thing I don't agree with is that Prince Harry wasn't allowed to wear his military uniform to Queen Elizabeth's funeral. Given he was the only royal to serve two tours of Afghanistan, I thought he should be bestowed this right." Answering this, Clive Hill, whose Twitter bio says that he's an ex-REME soldier, also shared the explanation for this.

He tweeted, "For all the civilians that keep asking why Prince Harry is not wearing the military uniform: He isn't the Colonel-in-Chief of any units. He's not serving, resigned his commission when he left the Army. He wore it at the vigil with dispensation from the King." Hill also shared an excerpt regarding the United Kingdom's Uniforms Act 1984 which regulates and restricts the wearing of Naval and military uniforms in the UK.

It read, "If any person not serving in Her Majesty's naval or military forces wears without Her Majesty's permission the uniform of any of those forces or any dress having the appearance or bearing any of the regimental or other distinctive marks of any such uniform in such a manner as to bring or under circumstances as to be likely to bring contempt upon that uniform, or employs any other person so as to wear that uniform or dress, he shall be liable on summary conviction to a fine not exceeding GBP 400, or to imprisonment for a term not exceeding one month." It's been more than two years since Prince Harry and his wife Meghan Markle opted to step back from their duties as senior members of the royal family, resulting in the Duke of Sussex losing his royal patronages and military titles.

Rising to the rank of Captain and undertaking two tours in Afghanistan, Harry has spent 10 years in the Army and still continues to work with fellow servicemen, sponsoring support for wounded women and men.

According to People magazine, despite this rule, an exception was made for both Prince Harry and Prince Andrew to wear their uniforms once during the mourning period. Andrew wore his military garb on Friday for a Vigil of the Princes. In contrast, Queen Elizabeth's eight grandchildren performed a similar vigil on Saturday, with Prince Harry wearing his Blues and Royals uniform.

The reason Prince Andrew was not allowed to wear his uniform is that he had been stripped of his military affiliations and royal patronages in January 2022, one day after his lawyers failed to convince a U.S. judge to dismiss a civil lawsuit brought against him by Virginia Giuffre, who alleged that he sexually abused her when she was 17 years old, reported E! News.

Meanwhile, numerous guests ranging from political heads of countries to distinct royal family members and dignitaries from across the world landed in the UK for the funeral of Queen Elizabeth II. The Queen's funeral is the first state funeral in the UK since Winston Churchill's in 1965.

A state funeral means that the UK government has officially declared the day of the funeral as a bank holiday. (ANI)