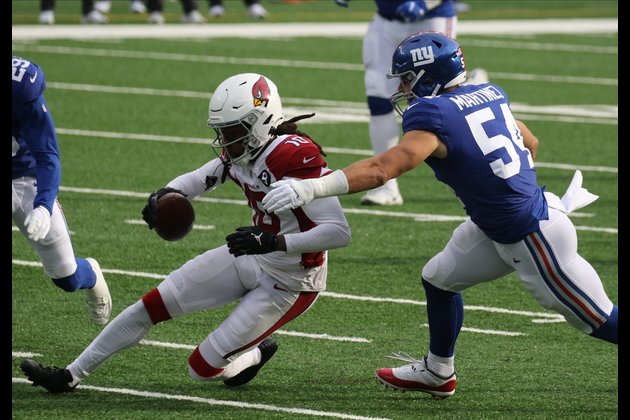 Martinez recorded 151 tackles last season -- ranking third in the NFL -- in his first campaign with the Giants.

Giants coach Joe Judge confirmed Toney's return but didn't bring up Martinez or Kalu during his media session. The team revealed the news later in the day.

"(Toney is) with us today in the building, so he's back with us," Judge said. "We have a number of guys for different reasons that we're actually going to take them a little bit slower. Obviously, coming off of that protocol as we learned last year with the number of players on our team throughout the season, we're going to go and move them around the field and make sure that he's ready to go, then we'll start integrating with our team. We're not going to go ahead and rush anything to get in the process. He'll be in the meetings with all our players.

"But in terms of practice itself, we're not going to do anything with him on the field with the team until we know he's fully ready to go. His timetable will be different, I'm sure, than a lot of the guys last year that we learned from.

"One thing we really took away from last year was these things are all very specific to each person, what their symptoms were or what their exposure was, but that time away from training is what's critical."

The 27-year-old Martinez played his first four NFL seasons for the Green Bay Packers. He has accumulated more than 140 tackles in each of the past four seasons; three of those campaigns were with Green Bay.

Kalu signed with the Giants as a free agent in the offseason after spending his first three seasons with the Tennessee Titans. He has 26 tackles in 28 career games.

Toney was a first-round selection (20th overall) out of Florida. He was placed on the COVID list last Thursday after testing positive.

Uncut diamond, at 1,175-carats, is third largest in world

PRAGUE, Czech Republic: The right-of-center Czech party, the SPD, which could be part of a new Czech government next month, ...