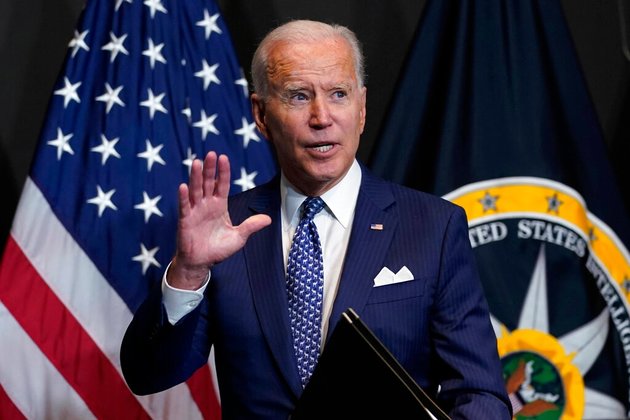 WHITE HOUSE - Russia is already interfering in next year's midterm U.S. elections, President Joe Biden said Tuesday in a speech at the Office of the Director of National Intelligence (ODNI).

Referencing the day's classified briefing prepared by the intelligence community for him, Biden said: "Look at what Russia's doing already about the 2022 election and misinformation."

Such actions by Moscow are a "pure violation of our sovereignty," the president said, without elaborating, in remarks to about 120 representatives of the U.S. intelligence community who gathered in northern Virginia at the ODNI headquarters.

Biden's public reference to something contained in that day's top secret Presidential Daily Brief is certain to raise some eyebrows.

"He's the president. He can declassify anything he wants to whenever he wants to," said Emily Harding, deputy director and senior fellow with the international security program at the Center for Strategic and International Studies.

"And I'm not sure it's going to be a shock to anybody that Russia is looking at disinformation for the 2022 election. I think it is a really good reminder, though, that Russia continues to do this and that nothing has dissuaded them yet," she said.

The president also had an ominous prediction about the escalating cyberattacks targeting the United States that his administration has blamed on state-backed hackers in China and those operating with impunity in Russia.

Biden said he believes it is growing more likely the United States could "end up in a real shooting war with a major power," as the consequence of a cyber breach.

Such cyber capabilities of U.S. adversaries are "increasing exponentially," according to the president.

Russian President Vladimir Putin seemed much on Biden's mind during his remarks to the intelligence community.

Putin has "nuclear weapons, oil wells and nothing else," Biden said, adding that the Russian leader knows he is in real trouble economically, "which makes him even more dangerous."

Biden also praised the U.S. intelligence community for its superiority over its counterpart in Moscow.

Putin "knows that you're better than his team. And it bothers the hell out of him," Biden said.

"I can see the wheels in Moscow turning to respond to that one," Harding told VOA.

Biden referred to both Russia and China as "possibly mortal competitors down the road."

In his remarks, the U.S. president said that Chinese President Xi Jinping "is deadly earnest about becoming the most powerful military force in the world, as well as the largest and most prominent economy in the world" by the mid-2040s.

Biden made several cryptic references to hypersonic weapons of adversaries. But he stopped himself once in midsentence after saying, "I don't know, we probably have some people who aren't totally cleared" in the room. In fact, a group of White House reporters was present, and a television camera was recording the speech on behalf of the media.

The president also appealed to his intelligence team, which is composed of elements from 17 different agencies, "to give it to me straight. I'm not looking for pablum ... and when you're not sure, say you're not sure."

Biden said he "can't make the decisions I need to make if I'm not getting the best unvarnished, unbiased judgments you can give. I'm not looking to hear nice things. I'm looking to hear what you think to be the truth."

Those words are "a big deal. That's the thing that he probably most needed to say" to this particular audience, according to Harding.

Biden stressed that the intelligence agencies should not be swayed by which political party holds power in Congress or the White House. He said it is "so vital that you are and should be totally free of any political pressure or partisan influence."

Biden vowed that while he is president he will not try to "affect or alter your judgments about what you think the situation we face is. I'll never politicize the work you do. You have my word on that. It's too important for our country."

The appearance by the 46th U.S. president was intended, in part, to demonstrate a different relationship with the intelligence community than experienced by his predecessor, Donald Trump.

"I think you can all make the inherent contrast," White House press secretary Jen Psaki told reporters the previous day.

Trump's attitude toward the intelligence community publicly soured after he sided with Putin's denial of the U.S. government's conclusion that the Kremlin had meddled in the 2016 presidential election. Trump, a Republican, narrowly defeated Democratic Party challenger Hillary Clinton in that election.

Uncut diamond, at 1,175-carats, is third largest in world

On September 15, 2021, the heads of government of Australia, the United Kingdom, and the United States announced the formation ...