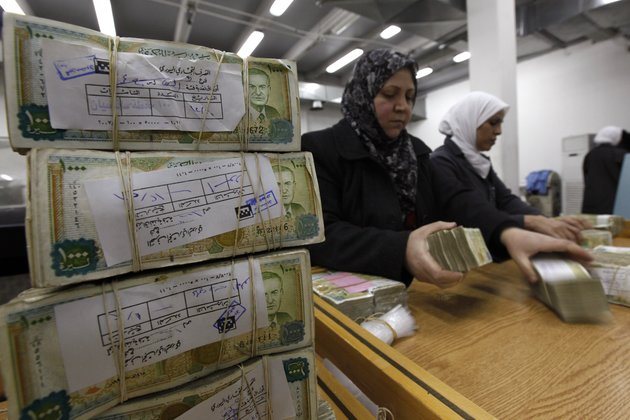 CAIRO - Sanctions and other economic pressures are making the lives of ordinary Syrians even more difficult, as the country's national currency falls to record lows against the U.S. dollar in black market trading this week.

Syrian analyst Majed Ruslan told Arab media that the Syrian pound is hovering at about 650 to the dollar on the black market, while the official rate remains close to 430. This, he said, is causing pressure on ordinary Syrians as prices increase for consumer goods such as cooking oil, dairy products and gasoline.

Syria's Central Bank governor, Hazem Karfoul, told state TV earlier this summer that it was not a wise policy to use foreign currency reserves to prop up the value of the pound.

Syria, he said, can't keep focusing on the numeric value of the exchange rate and exhausting its resources in defending it. The exchange rate is a barometer, not a battle line to defend at all costs, he added.

The plunging value of the Syrian currency came despite efforts by the government to give the impression of economic normalcy returning to the country.

Last week, amid much fanfare, the government hosted the Damascus International Trade Fair. However, it was not clear how many international companies signed deals, given the risks of falling afoul of U.S. economic sanctions.

Syria's labor minister, Jamal Qadry, lashed out at international pressures and countries like the U.S. that have been applying them.

While attending the Third International Labor Forum earlier this week, Qadry said international participants were showing solidarity with the workers of Syria in the face of an economic embargo and imperialist intervention and support for terrorism.

Syrian analyst and researcher Nasser Zuheir told a Syrian opposition TV channel, however, that he does not think that economic sanctions will cause the government to collapse, but will put pressure on the government and ordinary citizens.

The fall of the pound comes after the collapse of political talks, he said, adding that there are firewalls to stop the currency from deteriorating beyond a certain point.

Khattar Abou Diab, who teaches political science at the University of Paris, told VOA that it is "not clear whether the fall of the pound is due to international sanctions or backlash from government efforts to crack down on economic mafia warlords in the country," such as his brother-in-law, well-known businessman Ramy Makhlouf, who was reportedly placed under house arrest last month. Many warlords have money stashed in Lebanese banks that the government would like to recuperate.

Abou Diab points out that Tuesday's black market value of the Syrian pound (670 to the dollar) makes the monthly minimum wage salary of a Syrian worker worth just $45.

"The average Syrian is being severely punished," he said, "but the government is unlikely to be affected by any popular backlash."

The San Francisco 49ers are on their way to Miami to face the Kansas City Chiefs in Super Bowl LIV. ...

WASHINGTON - Key players in the impeachment trial of U.S. President Donald Trump and his defense argued sharply Sunday whether ...

WASHINGTON, DC - High profile lawyers Alan Dershowitz and Ken Starr have been brought in to work with the legal ...

The San Francisco 49ers are on their way to Miami to face the Kansas City Chiefs in Super Bowl LIV. ...

WASHINGTON - Key players in the impeachment trial of U.S. President Donald Trump and his defense argued sharply Sunday whether ...

ABUJA, Nigeria - The Indian Mission in Nigeria on Sunday said that 20 seafarers who were kidnapped by pirates last ...

Prince Harry and Meghan to cut formal ties with Palace